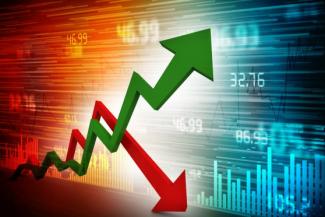 THE STOCK MARKET: WHERE IS IT GOING?

THE STOCK MARKET: WHERE IS IT GOING?

Over the years, I’ve heard many people ask, “Where is the stock market going?” And I’ve heard a multitude of answers that range from “no one knows” to “it’s always a gamble.”

Well, I’m pleased to inform you that I know where exactly where the stock market is going.  Yes, I truly do, and I’m happy to share it with you: it’s going up and it’s going down.

The actual question that people are really asking is, “Which of those two will it be doing tomorrow, or next week, or this year?” And that is what I am going to address today.

What is “the Stock Market”?

First, let’s get some definitions out of the way.  In this article, when I refer to the “stock market,” I will be talking about the entire value of the stock of public companies in the United States. This includes large companies, mid-sized companies, and small companies. Very few mutual funds invest in all of these companies at once, but a broadly diversified portfolio can embrace the majority of them. To keep things simple, I’m ignoring stocks of the many large non-US companies out there (think Nestle, Samsung, Anheuser-Busch, Burger King and Toyota, to name a few).

However, the general media tends to use a narrower definition of the stock market. The S&P 500, which is often referred to as “the market,” is an index that includes only the stocks of the 500 largest US public companies. That may sound like a lot, but this particular index is also weighted by size. That means that a few jumbo-sized companies make up a large part of the S&P 500, which effectively skews the entire index. Often an even smaller index, the Dow Jones Industrial Average, or “the Dow” is cited as what “the stock market” did today. But the Dow actually measures only thirty really large companies. That’s it. The Dow is actually far narrower than the S&P 500.

Rumors, Gossip and Fears, Oh My!

It’s important to understand that the price of publicly offered stock is determined daily, based on how many shares are bought or sold on that particular day. Individual investors and institutions, which are continually buying and selling, may be affected by whatever news of the day is happening, as well as by rumors, fears, gossip and all sorts of other “middle school” level emotions.

This helps explain why we often see huge drops in the S&P or the Dow, followed later in the day or in the following week(s) by rebounds. Rumors cause investors to sell, and then the facts prove the rumors wrong and investors buy back in.

When the Rumors are Real

Sometimes, it’s not rumors, but rather the newfound revelation of facts instead. Think of 2008, when the market learned that many of the highly-rated bond instruments sold around the world were in fact not that safe. The market plunged and it took years for even well-diversified portfolios to recover their value.

It’s worth noting that you probably won’t feel these bumps as much if your money is invested in mutual funds (vs. individual stocks) or a long-term, buy-and-hold portfolio. However, most portfolios will be affected by these market spasms, to some extent.

It’s Different Over the Long Run

Let me take my theory about “the markets go up and the markets go down” one step further.  Although the stock market is typically impacted in the short run by rumors and fears, over the long run the value of stocks is determined by profitability of the company. In short, if a company can figure out how to consistently make money over the years, one can reasonably expect this to be reflected the value of its stock.

The next time you are concerned about what “the market” is going to do, ask this question instead: “When am I going to have to withdraw money (sell stocks) from my account?” If the answer is more than eight to ten years from now, then who really cares what the market does this week, or even this year? With a long time-frame (the longer the better), stocks have historically provided strong returns. Naturally, investing in stocks contains no guarantees, but over the long run there is high potential to receive returns superior to a safe interest-bearing account.

So, if you’re in your twenties, thirties, forties, or even your early fifties, saving for retirement with no plan to sell any shares (i.e., take money from your account) for the next few decades, don’t worry about what the market is doing. Invest in a wide and varied mix of companies, buckle up, and be prepared to ride out any roller coaster like rides to achieve the potential for strong returns.

If you are planning to use some of your money (i.e., will need to sell shares) in the next several years, it would be prudent to hold that amount in something other than stocks. However, because retirement typically lasts decades, stocks will likely still need to be a part of your portfolio anyway. This is because the long-term growth potential of stocks will likely provide you with additional assets for you in the years ahead.

It’s Not About Beating the Market

In the end, to be successful at investing, you have to keep your eye on your long-term goals.  Resist the urge to “beat the market.” For us, that’s never been our goal. Rather, it’s to make sure we do everything possible to help you achieve your future income needs and to help your investments outlive you.